As I type this post, I’m one night into a two-night Indian food binge (two events back to back that just HAPPEN to revolve around Indian dinners – truly!) and I have fresh oatmeal chocolate chip cookies baking in the oven.  Sounds rull healthy, no?

Technically, if you look at my ROCKtober goals, I’m not necessarily off track:

I am still eating salads for lunch (thanks to the combined powers of SunMoon and Salad Stop) and was able to do so even while traveling in Sydney for work, which kind of makes me wonder about my clients who swear they “can’t possibly” stay on track while traveling (granted, Sydney is a health food mecca – but still!  It IS doable!).  Veggies at dinner have been a cinch as well because hey, even Indian food has tons of veggie options available (although most nights we choose fresher, healthier veggies here in the Dale residence).

I’ve done yoga weekly since ROCKtober began, even taking time out for a 30-minute flow session at home before I went out last Saturday night.  And going out?  I’ve been dead-on sticking to my drinking 2X/week rule, even in Bangkok, even in Sydney, and yes, even this week when I had to choose between drinking during a Bollywood movie and drinking during a USC football game (had to choose the former because hey, ‘SC plays at 7:30am on a Sunday anyway).

Not hard to run with this view

I loaded up on runs while “down undah” as well since the weather was so gorgeous it looked (and felt) like heaven, so even though I’ve only run one week out of four, I actually ran four times – so, law of averages and yada yada.  Same rule applies to water – I’ve hit 100+ ounces daily with a couple exceptions that were easily balanced out by days (like Wednesday) where I got 138. 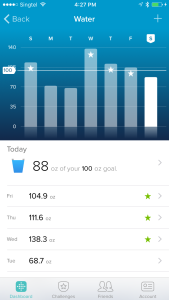 Don’t worry about today; it’s not even 5pm yet

And now for the less triumphant goals.

Nick and I have yet to be together on a weekend between 12-2pm, which is the ONLY time our neighborhood pool is open to the public, so we’ve yet to swim a single lap there in ROCKtober.  I’ve hit Crossfit 4X in 4 weeks, which is decent, but only HALF of the 8X I set out to hit.

Someone (cough) thought it would be a good idea to take advantage of the “4 for $20” Tim Tams deal at Duty Free (read: I brought junk food into the house).  And I am still struggling to find that daily dose of positive self-talk, particularly about my body, particularly when I have not lost another single pound since my three-pound victory in the first week (I know, I know, 1-2 pounds per week, slow and steady, I preach it and I really do believe it). 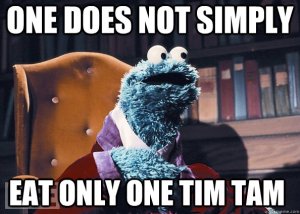 So all in all, I’d say we’re operating at about 80-85% for the month, which is good, but a truly rockin’ ROCKtober takes 100% commitment.  Onward to the final week…

How have you been doing on your ROCKtober goals?  Any victories – or hiccups?